The Congo Cabaret: Hosted by Muley the Mule and Friends - Part 1: The Beginning

Although this show was live, it went off with very few hitches, namely the crew members (Muley's friends) that kept interrupting the show's host (obviously Muley) about an unexpected late-arrival to the program.  That's another story for another post.

This is a story about the behind the scenes of The Congo Cabaret: "That's Entertainment!"

On January 22, 2017, Muley the Mule and Friends helped host The Congo Cabaret, a two-hour dinner-and-a-show live program featuring many great talents before 100 guests and raising nearly $2500 for the food ministries of First Congregational Church which feeds lunch to nearly 400 people per week, helps supplement around 300+ families with food, offers a chance to shop for more supplemental food on Monday, Wednesday, and Friday, and a clothes closet on Tuesday and Thursday.  And this is weekly, folks!  Oh, and you can donate to the cause if you CLICK HERE.

In spring 2016, the idea for expanding one of our own shows, Muley's Talent(less) Revue, into a full-fledged two-hour talent program to support everything in the last paragraph was taking slow form in the shape of an outline, but it just wasn't right.  Things were amiss.  In August 2016, Joel Chapman gave a call that he wanted to produce a Cabaret and wanted Muley and Friends to host.  His notes were in line with ours, more or less, and we of course said: Yeah!

The talent came from within the church itself featuring many who have traveled and toured with their shows (including our fuzzy cast) and as they were all signing-up, with some surprises thrown in, it became clear that this was destined to be a fantastic night of entertainment unseen in those hallowed halls.

But, it all has to begin with planning to work out a show for 13 human performers, volunteers, chefs, and four willing critters which became a 31-page script for the hosts including two performances not listed and two performers that were our secrets.  Don't you want to know yet?  Keep on reading.

A meeting was held at the Congo Cafe in "The Hub" where the show would be performed to plot-out the lay of the land: stage, set, host-stand.  Producer Joel Chapman met with Kevin L. Williams and DaMarco Randle to discuss staging the production, and Joel's stage experience found him setting the lights and designing not only the stage, but also the title logo, poster, and program.  There would be a historical display of  the "Muley-verse."  The Art Department would be in charge of enlarging the "That's Entertainment" sign for the stage itself.  It was determined that the show itself would not be recorded or televised due to the content and that it was a live show, we didn't want photography other than one official individual doing such.

The script was underway, the performers were all getting rehearsed, and we met for the production meeting where we would learn the line-up of the acts and what Muley the Mule and Friends would be doing for the performers' intro's and outro's.

A prophetic Fortune Cookie during this time period stated: 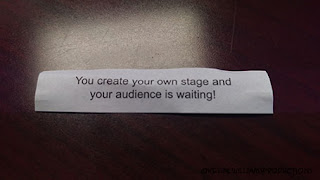 Then, came time for posters and ticket sales.  Our very sweet, very helpful Caroline Rubenstein was there to help make sure the ticket sales were taken care of. 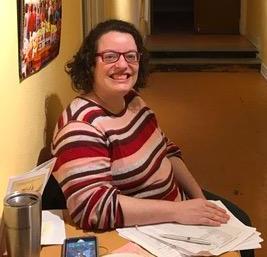 Don't you just love behind-the-scenes stuff?  And, of course, there was some advertising taking place:

Advertisement Spot #1 by Roger Courts featuring producer Joel Chapman:
Published on Dec 5, 2016
Joel promises two hours of mirth and good cheer in the New Year from a Cabaret loaded with Memphis and MidSouth talent: something for all the family!

Advertisement Spot #2 by Roger Courts:
Published on Dec 12, 2016
Kevin Williams' charming, winsome, and bold "Muley" announces the First Congo Cabaret, coming Sunday, January 22, 2017. Featuring Cheryl and Mark, Brennan Villines, Joel Chapman among a delightful, family show of talented and engaging entertainers. Dinner is included! Not to be missed, so be sure to mark your calendar and save the date for "That's Entertainment" Cabaret!

It should be pointed out that tickets completely sold out on January 16, 2017, for this spectacular show!

And while all of this was taking place, preparations continued with show construction.  Here are some stage views during Tech Rehearsals on January 21, 2017!  We're one night until showtime!

The show's programs and tickets were printed and ready for the following night: 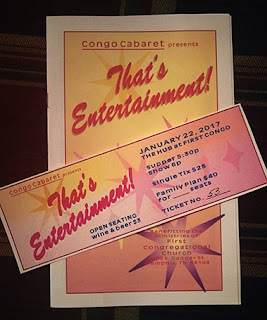 The script was completed and signed by all the cast that night.

So, now Tech Rehearsal is complete and everyone is ready for the show.  The first thing to greet the audience upon entry is, of course, the "History of the Muley-verse" display which we'll look at next along with the full program scans and list of cast and crew credits for the show! 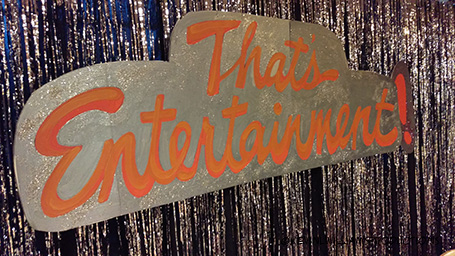