There are several people we wish to thank for helping us get the TV Special "The Muley and Friends Show" 'Millionaire Magazines' off the ground.  Of course, the credits in the show thank all those involved in the program: Martheus Wade, Janet Wade, Andrew Chandler, Nora Childers, Jonathan McCarver, Brad Alsobrook, Ed Griffith, Beth Kelly, Lisa Pretti, Drew Russom, and Anthony Howald.

First, we'd love to thank our home church, First Congregational Church, for allowing us space to hold auditions and the preview party, especially Julia Hicks who has been so helpful scheduling us the space.  Over all, we wish to thank all those who attend First Congo as they have always been supportive of our Mule.

For the Preview Party, we'd love to thank Steve Swift and Voices of the South for offering their chairs during the First Congo Thanksgiving Feast so we could keep chairs in the Conference Center!  (One of our favorite performances was at the First Congo 150th Banquet Dinner with Sister Myotis, with whom Steve is very close!)

Thanks to Bernie O'Brien at ACME Classics TV for giving us a televised stage for Muley the Mule and Friends!

We wish to thank Memphis Magazine and The Downtowner for offering us stacks of magazines for use in the finale, as well as The Memphis Flyer.

A big thank you shout out to Angela Freeman who helped turn the house into a big mess for shooting puppet films and helping stack up the magazines for the finale, as well as helping cater the meals and meetings.

Special thanks to Kent Hamson and Rising Fyre Productions for helping color-correct the film.

And a giant thank you to YOU, the reader, for your love and support during the filming of this program.

I think this about covers it for acknowledgements not listed in the credits!

A few more acknowledgements from the cast and crew.

Buford the Dog's assistant, Martheus Wade, wanted to share what he's thankful for during the holiday that the show came to television:


I'm thankful for my wife and son. The ability to draw and teach others to do so. My family. My friends. And the friendship that has brought me so much laughter and a certain dog and a Christmas saint with a fish habit.
Stage Manager and Producer, Brad Alsobrook, has a few thanks he'd like to shout-out:


Hi Friends,
I'd like to start out by personally thanking everyone on the cast and crew for all their hard work and for doing such a great job....
But a special thanks goes out to Kevin L. Williams the creator and caretaker of Muley T. Mule, Buford the Dog, Roy Duck, Missy Mule and all the other screwball characters he has dreamed up.  Without Kevin's quick wit, good sense of humor and great script writing ability,  there would not be a Muley and Friends Show.
Thanks to our wonderful group of puppeteers for bringing Kevin's colorful cast of characters to life. And thanks to Nora and Jo-Nathan for taking care of Muley and his friends (thanks for potty training them)...
And last but not least...a BIG thank you goes out to Bernie O'Brien at Acme Classics TV for having faith in us (and for having patience)  and for giving us the opportunity to do The Muley and Friends Show.... Without your support, the Muley Show would not have happened... Thank-you for giving us a chance to share Kevin's dream and beloved characters with a wider audience.


Our camera assistant, Bethany Kelly, added:
Many thanks to my very talented friends, Kevin Williams and Muley The Mule, for including me on this great project and for allowing me in some small way to be a part of their wonderful, ever evolving dream come true. ----(And, an extra thanks to Muley and the rest of the gang just for being so darn cute!)

Much love ~~ Bethany aka Beth
Posted by MuleyTheMule.com at 9:10 AM No comments: 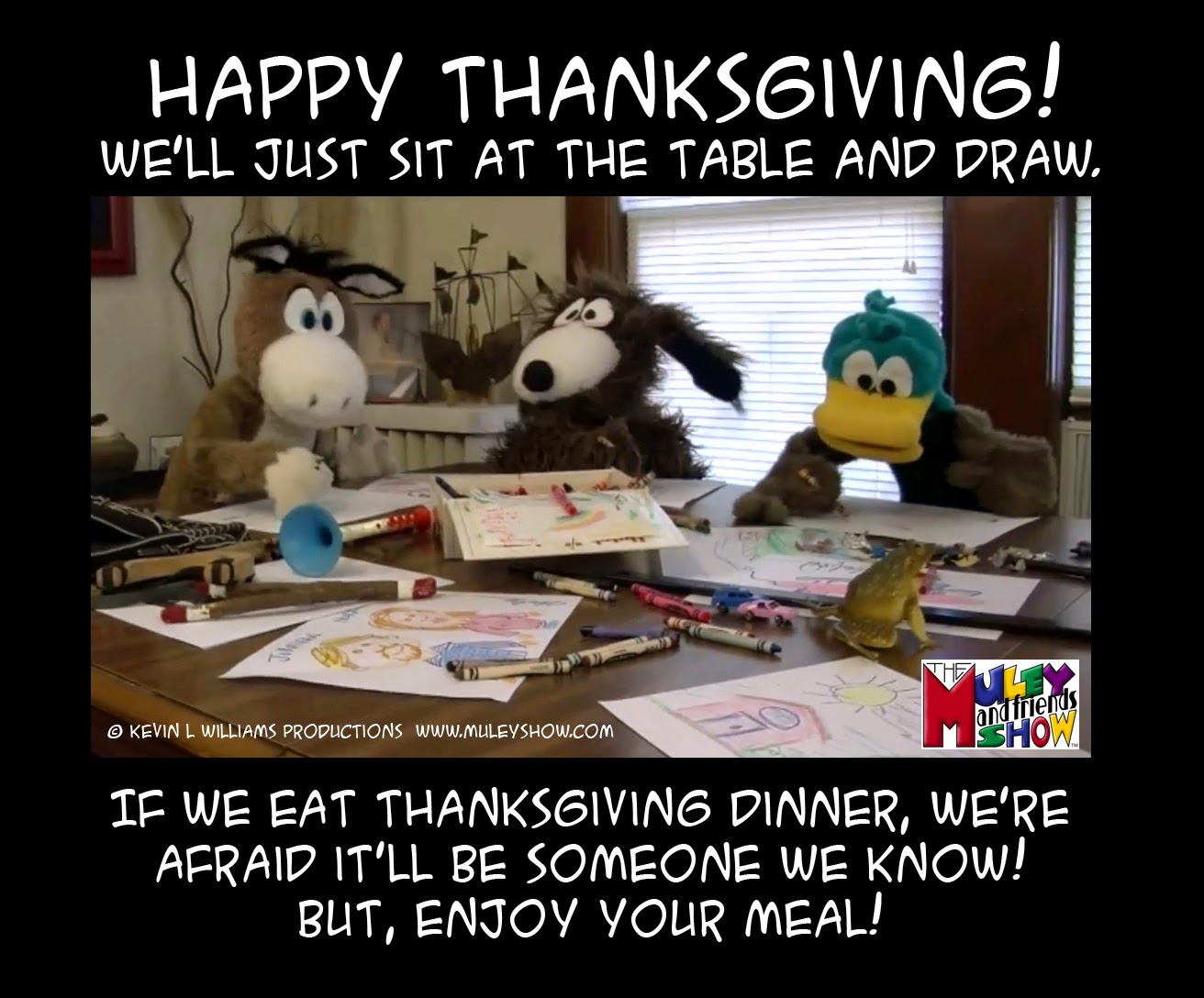 Posted by MuleyTheMule.com at 9:00 AM No comments:

How to DVR "The Muley and Friends Show"

We can promise you that, although you can't see the show's name in the listings, the following channels will be showing "The Muley and Friends Show" on Thanksgiving Day:

So, why doesn't the show name appear in the listings?

ACME Classics has to turn in their schedule a little over a month before the actual programming hits.  That way, Comcast and U-Verse will be able to have their television guides loaded and ready to show on your screen.

However, it was a little after the previous schedule was sent that the decision was made to show "The Muley and Friends Show" on Thanksgiving Day.  So, when you look at the schedule, you are going to see Roy Rogers or some such.

Instead, ignore the listings and set your DVR for the above channels and times (a little before and give it about 40 minutes to run) to be sure you get a copy of the show saved on your system! 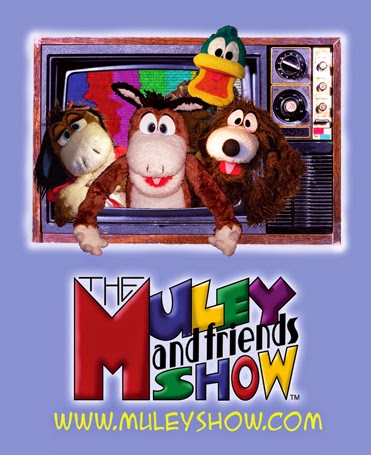 Posted by MuleyTheMule.com at 4:09 PM No comments:

So, let's look at some of the teams throughout history:

Laurel and Hardy
Abbott and Costello
The Marx Brothers
The Three Stooges
Muley the Mule and Friends...

Muley the Mule has never been seen too far away from his best pals, Buford the Dog and Roy Duck. (And, who can forget the self-proclaimed unrequited love interest, Missy Mule?)  What made these three such great friends?  None could ever know; but, all it takes is that one little moment for something to spark and that's when great friends come in to your life.

One of the greatest things about Muley the Mule and Friends is that, no matter what their differences are, the critters look past their differences to what is on the inside.  They truly care about each other (yes, Muley cares about his friend Missy {who cares too much}).  Ultimately, they have each others' back, as they say.  What do you look for in a best pal?  Who are your friends?

Here are other friends of Muley's that will be making appearances in the shows as time goes on.  If you've been to any of the live shows at festivals and conventions, then it is very likely you may have seen some of them already.  Especially if you've read their comic strip collection.

Read the comics in "Muley's Comix and Stories" collection! 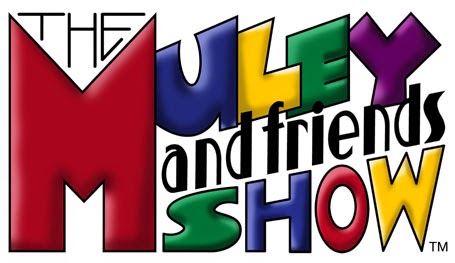 “THE MULEY AND FRIENDS SHOW” JUMPS FROM STAGE TO SCREEN


MEMPHIS, TN, – FOR THE FIRST TIME EVER, “The Muley and Friends Show” makes a debut to television with the special television presentation, Millionaire Magazines.  The episode will focus on the madcap misadventures of Muley the Mule (Kevin L. Williams) and his friends Buford the Dog (Martheus Wade), Roy Duck (Andrew Chandler), and Missy Mule (Janet Wade), as they work to help (badly) their human keepers, Jonathan Monroe (Jonathan McCarver) and Nora Moore (Nora Childers).  Appearing on ACME Classics, Comcast 15 and U-verse 34, 8:55am and 4:25pm, also over the air on CH 23.2.


“What I hope to achieve with our television program is bringing family members together for some fun and edutainment,” said creator, Kevin L. Williams.  “Having the show debut on Thanksgiving will do just that.  Muley the Mule and Friends have always been about friends and family, and keeping them close—viewing and laughing together—will be fulfilling to all of us.”


“The Muley and Friends Show,” based upon comic strips (published in newspapers, international journals, magazines, comic books, newsletters, and the internet) featuring the same characters, has appeared in live performances in the convention and festival circuit where Muley has emceed events such as Fan Films and costume contests.  While shooting his own “Mule on the Street” mockumentary, he was interviewed on the TV Guide Channel and seen nationwide.  Given the title “Official SpokesMule of the Ronald McDonald House of Memphis” charity, he often volunteered to emcee, maitre’d, and talk about the House at events, news, and radio.  To date, Muley (and his friends) have appeared in all forms of media with the exception of motion pictures.

Now, in their first-ever televised TV special, a 22-minute story on helping – proper ways to do that – and how parents should handle things when kids do things wrong, the story will achieve answering the question of social issues as well as a need for family time and fun.


“One of our greatest compliments was when Muley the Mule and Friends were described as ‘taking Muppets and Peanuts, mixing together in a bowl, putting in the oven until half-baked,” said creator Kevin L. Williams.  “Innocence and irreverence rolled into one happy burrito.  Or, one happy burro—since the title character IS a mule.”


Catch “The Muley and Friends Show” Thanksgiving 2014 on ACME Classics television on Comcast 15, U-Verse 34, and over the air on channels 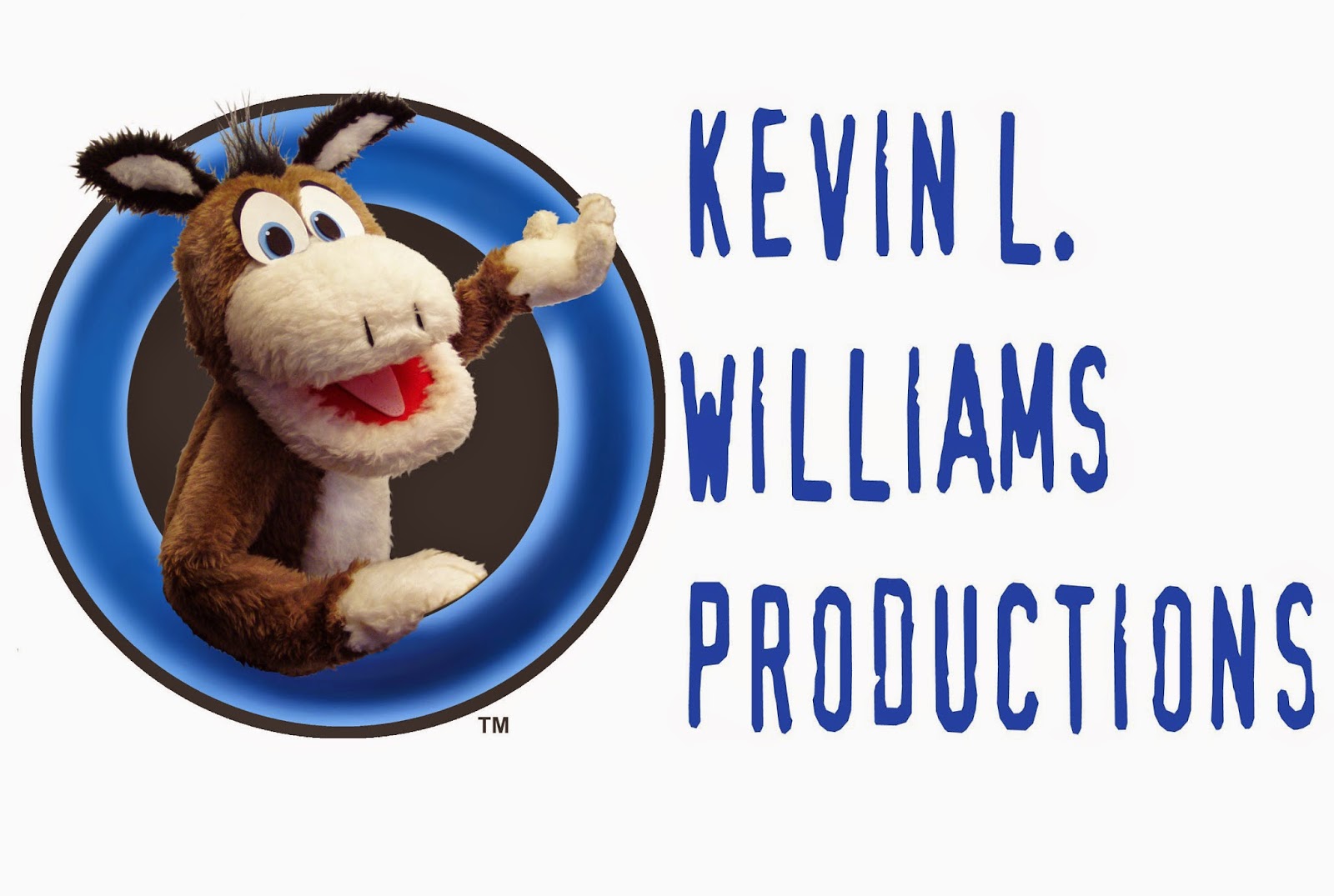 About Kevin L. Williams Productions, LLC.
A recognized entertainment resource, Kevin L. Williams Productions has excelled as a go-to for family entertainment whether comic strips or books to live puppet productions.  Adults and kids alike are drawn to the diverse cast of characters that have appeared on stage, television and radio, and all forms of print media.  The characters have been highly sought after to emcee events and other stage productions, and non-MuleyVerse puppets have appeared in various other productions, including fan-favorites and award-winning shorts.

Be Safe, Be Happy, Be Well!
Your Pals,
Kevin L. Williams
& Muley the Mule

Visit Muley the Mule and Friends Comix and Stories at
www.muleythemule.com


Posted by MuleyTheMule.com at 9:24 PM No comments:

"The Muley and Friends Show" Opener

To get you in the mood for the TV Specials, here is our TV Show Opener.
(If you have been to one of our live shows, you know this is different than how we usually greet the audience--
no eyes being put out by cookies flung into the audience.)

Hope you enjoy the show!

The Boys and Jonathan

Just when you think it's safe to simply agree and say "yes," you realize all too late who it was that you just agreed with, and that you didn't find out exactly what you agreed to.  This is a lesson in caution, because (while you were reading this, you didn't realize that) you promised to bring me a bunch of delicious cookies.